This week has been eye-opening and fabulous.   Why?  Well…

a) My internship ROCKS.  The girls are hysterical and the position itself is creative, non-restrictive, fun, and allows me to explore LA while learning the ropes of event planning. Score!
b)  In addition to free airbrush tans at work, I get free hair color and cuts!!!  Can you hear the angels singing?  I can.  Hallejuliah!  My bank account is skipping around with bunnies under a rainbow right now.
c) The people here are exceeding my expectations.  For instance, today, when it would be very easy for the fashion show stylists and coordinators to have a mental breakdown and bust out the z-shaped snap during a diva moment, they were all calm, cool & collected; polished and poised.  Nobody was upset.  Nobody freaked out.  Everyone was polite and gracious.  It was refreshing!
That’s not to say everyone is nice, or humble, or self-indulgent.  Take Exhibit A:
When: Yesterday
Where: the tanning studio (work)
Setting: Me getting airbrushed by new employee and friend, Katie.  A woman who I will only identify as “model” is assisting in the airbrushing because she has just graduated from airbrush training.  Model is approximately 5’10” and a size 00.
The scoop: I’m standing to my side getting airbrushed.  The model and Katie are both carefully examining my side to make sure the application is even and to help Katie identify anything she may be missing.  Then I had the ultimate Bridget Jones moment.  It went a little something liiiiiike…
Model: Okay Katie that looks good.
Katie: Thanks!
M: But on heavier people, you need to go over their legs more.  It helps them to appear skinnier.
Long, awkward silence.  I’m starting to turn red.  I can tell Katie is uncomfortable.
M:  Not that you’re heavy, Kirbie. (whispers to Katie) But really, go over her legs again.
Look, I’m not a size zero.  I’ve never been that small ever.  I don’t want to be that small either.  Sure, I’d like to lose 5 – 10 pounds but nobody ever needs to hear that.  I think the thing I was most shocked about was that it appears as that is the mentality here – that someone my size is heavy?  I always thought it was something glamorized in movies and magazines – being a waif – but it really is a solid lifestyle here.  I’ve seen people only drink green tea all day.  For me, I’d rather work out than give up food.  It’s just the way I am.  But anyway, it pissed me off but didn’t get me too down because frankly I don’t give a damn.
Friday was long but fabulous.  I got up at 4:30 to get ready to be at the office by 6:00.  We did some last minute preparations and made our way to the Bev Wilshire, which looked immaculate with all of the tables out and the runway up.  Time seemed to pass quickly because before I knew it I was done sorting and alphabetizing 750 guest name tags and getting ready to dress the models backstage for the fashion show.  It was like a bunch of wild animals running around in a cramped backstage area during the show, with coordinators calling for different models to hit their cues and makeup artists waiting at the entrance to fix and primp the girls before they hit the runaway.  I was dressing a model  who was literally 6’0” tall and drop dead gorgeous.  She wasn’t too friendly though.  I’d be reaching to take off her shoes and before I could get down she’d say “shoes. jacket. pants. sunglasses.” It was a little taste of the diva lifestyle, but nothing I can’t handle.  A recognizable face that was there was Saleisha, the winner of cycle 9 of America’s Next Top Model. 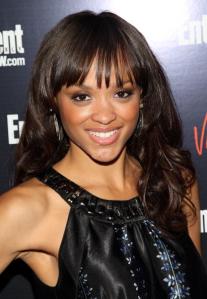 She was beautiful and fun and didn’t take herself too seriously.  She was also extremely professional.  Go Saliesha!
After the show we were busy trying to get all of the fabulous designers clothes off stage.  Once that task was completed, I walked over to the feeding station to grab some coffee when I saw the other assistant, Erica, frantically trying to layer cream cheese on a bagel.  “Could you make a coffee please?  With cream, not milk, and Sweet ‘n’ Low.”  Okay.  Sure.  I start to make it and there aren’t any lids for the cup.  I pour it into a glass mug.  “By the way,” she says, “it’s for Larry King.”
Oh, no big deal.  He apparently had just waltzed by me but I didn’t even notice because I was running around with a cart of clothes.  The coffee was then delivered to him and the only thing missing were napkins, which, go figure, were no where to be found.  Cue me and Erica running around backstage, attempting to find an outlet to the kitchen so we could get a few paper napkins for Larry.
Larry was rather grumpy because the show was running a little behind, but once he got on stage to present the award to Lisa Ling he seemed to calm down and was a crowd favorite.  I might have this wrong, but I think Larry replaced Justin Timberlake last minute (right? wrong? whatever) so all I could think about was what if JT had been sitting backstage around three feet away from me instead of The King?! I guess the real question is what WOULDN’T I have done?!   Anyway, I observed Larry and the only way he resembled Justin would have to be his Nike socks (pulled halfway up his leg almost) and his Nike kicks, which he was wearing in coordination with a nice jacket and jeans.  So stylish you are, Mr. King!  You gotta hand it to him, at least he wasn’t wearing suspenders or something.  I also noticed that when calling people he was dialing actual numbers instead of going through a phone book.  It’s rare that anyone memorizes a phone number these days – heck, I don’t even know my boyfriend’s phone number by heart!  Sorry Stu.
I also got to see Lacey Chabert (Party of Five, Mean Girls) and Tori Spelling – Erika said she was a doll and I’m not surprised!  Other people there were Vanessa Minnillo (no Nick, boo), Stacie Keibler,  there was a nametag for a “Jennifer Hudson” but I don’t know if it was the celebrity one or not, Marcia Cross, Lisa Ling, and several others.  It was a really wonderful event for a great organization.  Check out the Step Up Women’s Network – I want to volunteer now! http://www.suwn.com
All in all it was a long day but eventful and I learned a lot:
Don’t run, ever.  It freaks the clients out and screams “problem!!!”
Anything can happen.  Improvise and be quick.
Things change.  Go with it.
It was a great weekend as well.  I worked which some people might loathe but I seriously love to work.  Makes me feel accomplished.  Saturday night I saw The Hangover and hysterical would be an understatement, although I have to say half the time I was saying “watch the baby!!!!”   Please go see it.  It was a great movie and now I’m dying to go to Vegas, yet frankly terrified for Stu and his friends when they go in August because honestly – you boys know I love you – they’re all hooligans and the things I have seen happen with that group has been insane.
For instance, it was week one of Stewart and I dating when after party-hardying at Black Friar we took a cab back to the apartment only to see a car that ran INTO a stage in the middle of Addison Circle.  Turns out that car was one of Stu’s friends and he decided the best idea would be to haul serious ass in order to avoid the cops.  Meanwhile the other guys were all searching for him and later they had me make Mac ‘n’ Cheese with spray butter. When asked about why the driver of the wrecked car was driving in the first place (he was clearly drunk AND had been put in a cab prior to this escapade), he said he was just going home to make out with a girl.  Totally legitimate, right?
Therefore, I wouldn’t put it past them to pull off some of the shenanigans from the movie.  And if Boss is going on this field trip, I truly fear what kind of illegal activity might take place.  You boys know I say this all in the most loving way – you make my life way more entertaining and I wish all the time we all could be together again soon. 🙂
Anyway that’s it for now.  I’m off to bed.