Most of you know my obsession with skin care. I have a highly detailed regimen that I began when I was thirteen, mostly because I was obsessed with magazines and celebrities. I was wearing SPF 30 before any of my friends knew about the damaging effects of UV rays. I should be Proactiv’s next spokesperson solely based on the fact I’ve used their products for 10 years now… ironically I can’t because I can’t find one “before” photo to compare my skin to. And two years ago my aunt bought me a Clarisonic skin care brush because she saw it on Oprah, not knowing I’d been pining over this new technology eight months prior.

You get the point. If it involves skin, I want to know about it. So after reading Bergdorf Blondes a few years ago, I told my friends that I was going to get an alpha beta peel.

In the book, the character “moi”goes into a dermatologist’s office and gets this face peel. Plum Sykes, the author, describes the experience as follows: Moi goes in and she sees a bunch of women exiting the doctor’s office with glowing skin as if they had a “pregnancy glow.” Moi then decides to get the procedure and endures a few minutes of minor tingling before leaving the place glowing brighter than the sun.

Me, being 20 at the time, felt I was in desperate need of an alpha beta peel. If a Bergdorf Blonde can get one, why shouldn’t I? Such logical reasoning.

After a ton of research, I was set on an appointment at a local european spa, known for their luxurious facials and body wraps. I mean, if it’s european, then it must be good. Why do you think all the celebrities are constantly taking trips to Capri and Florence?

I was leaving for New York City the next week to catch up on some much needed Yankees games. I was so exciting to get glowing skin before this trip because I just knew something magical was going to happen on my trip, and I had to look fabulous!

So let’s fast forward to Saturday, the day of my appointment. I had booked online, which might have been the worst decision ever, because when I walked inside and sat down, nobody bothered to acknowledge me. This wasn’t my first rodeo, and I knew that I was supposed to sign some paperwork… standard spa procedure. Yet that never happened. However the spa was tranquil and calm, and it was beautifully decorated. It wasn’t like I had just walked into the ghetto and the floor hadn’t been swept, and the technicians were reusing the same instruments. It looks nice and professional.

My appointment was at 1:00. It was approaching 1:20 and still nobody had said a word to me. I approached the front desk.

“Hello, I had an appointment at 1:00. Kirbie J.?”
The receptionist gives me a once over, inspecting my workout attire. She looks at the books.
“Oh. Yeah. Um, let me call your esthetician.”

Finally! I was eager to get this show on the road. I wondered why the esthetician wasn’t ready and waiting for such an important appointment. About five minutes later, she emerged from the back. I cannot remember her name for the life of me.

She gives me a once-over, similar to the receptionist. Did I have a third eye or something?

“Hey, so I hear we’re giving you an alpha beta peel. You look too young to be doing this.”
I look at her in shock. “Really?”

“Yeah. But I’m not going to deny someone a peel!” We walk towards the back. Why didn’t she inform me of this before? I mean, I know my friends thought I was crazy for doing this, but I was getting the sensitive version of the peel. It was probably like the at-home kit I had, right?

The rest is a tad fuzzy. Things I remember: a dark room with spa-like music, something equivalent to a dentist chair, a brief cleansing from the esthetician, a small tingle, a larger burning sensation, a massive pain all over my face that can only be described as my face igniting, the lady going, “Oh, um, well usually the skin starts peeling a day after the treatment but yours appears to be peeling right now”; me crying, her drying my tears, me asking her to take the solution off, her pouring some kind of neutralizer on my face, me still crying; her using tweezers to peel off the skin, me shaking and crying, her asking if I had used any acne products that day (uh, yes), me starting to sob; her not talking.

Needless to say it was a horrible experience. At one point she gave me a handheld mirror so I could inspect my battle wounds. She was right, my face was starting to peel before it had even officially “burned” off. You know when you get a blister and it turns white from being in water, and then it peels off? That’s what a majority of my face looked like. Talk about horrifying.

I still had to pay for the treatment regardless of the fact that I could have sued them for not getting my client info or asking any precautionary questions or telling me NO because I was 20-years-old asking for a maximum strength facial peel.

What happened to my face that day is a little hard to describe. This woman made me look like a decrepit third-degree burn victim. I couldn’t even open my mouth to yawn because it would break my skin. It turned red eventually and I looked like I had plastic on my face for a good five days.

I called in sick from work the following Monday because it was not only traumatizing for myself but I was not about to traumatize anyone who had to see me. Bless my co-workers hearts, when I got back on Tuesday they all tried SO hard not to laugh at my expense, because I seriously looked like I had a peel-off masque on my face but it was actually my own skin. Disgusting.

I still looked like shit on my way to NYC… and lucky for me, I was meeting Zac Efron the day after I arrived. I had asked my Uncle to get me the hook-up at The Today Show, where Zac would be promoting Hairspray. Uncle Rog pulled through and got me that connection I was dying to make. And I looked as red as the big apple itself.

I haven’t gotten another facial peel since, but I can’t go without saying that once all of the dead skin had finally peeled off – a day before I flew back to Texas – my skin looked FLAWLESS, which was what was described in the book. So Plum isn’t a complete liar, she just forgot the few minor details that you’d practically have to set your face on fire before you get to that “faux-pregnancy glow.”

For your enjoyment, here’s a photo of my face with Zac Efron. Just looking at it makes my face hurt. 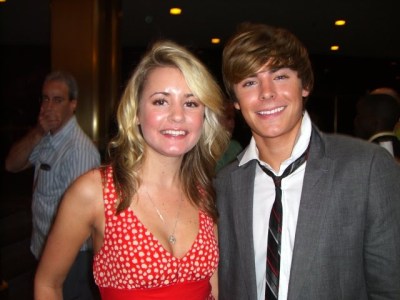