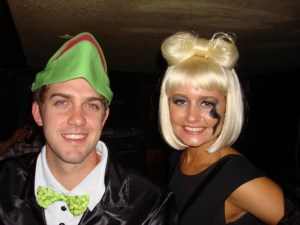 As I have been blogging about, I was Lady Gaga for Halloween. I had the whole get-up, except I chose not to wear her trademark sunglasses or carry around a disco stick (people on ebay were charging $100 for the legit light-up ones). So hairbow and all, I flew to Dallas to spend five days with Stu for his birthday and to visit my friends and family as well.
The weekend was a BLAST. It’s so hard going home that sometimes I prefer to not even go because I never want to leave. Tears are always shed and I constantly have to remind myself that I’m in Cali for a reason. I think Kidd Kraddick in the morning put it best on Tuesday morning when he said, “The only good things about LA is the weather.” I’d have to agree, really. That and the fact that the entertainment industry is at my fingertips. I love that aspect of El Lay! It’s just hard having a family and familiarity back in Texas and not having that here (yet).
So on Friday when I met up with the Chain Gang and a few of my other friends I knew it was going to go down. As Elise’s brother Jake put it? “Kirbie was really drunk on Friday!” Yes, yes I was. But let’s be honest, it doesn’t take much for me to get a buzz. And everyone can admit that I am very good an controlling my alcohol. So it was clean, harmless fun.
Saturday we went to the Frog Five tailgate where myself and the CG only mingled with, well, ourselves and then snuck into the game via old student IDs. Stewart had to use Lindsay’s so thank the Lord that they weren’t looking at them too hard.
That night was Halloween so of course I was excited! I had waited 31 long days (well, actually 95 if you count when I started planning my costume) and the time had finally come! I initially wasn’t going to wear tights with my get up until Stewart saw me and told me to put some on (and stat!). However getting ready was a blast and I couldn’t wait for the night ahead.
We hit up The Cellar first because as we waited in line at The Aardvark we noticed NOBODY was in costume (lame). However I must mention the amount of dirty looks I got for wearing this leotard. You would have thought I had a third arm or something. But I am not ashamed and I think Lady Gaga would think I did her proud.
Stewart’s costume was as HUGE hit. He went as Kermit the Frog and people were approaching him for pictures and everything. It was quite funny seeing a 6’2” man (are you taller?) wearing a giant frog costume. He’d even get on the floor and hop around like a frog. The reason why he went as Kermit was because that was Lady Gaga’s date to the VMA’s this year!
So we had a few drinks, sang a little karaoke (our rendition of “Love Story” was pretty much amazing) and danced a lot. Me and the CG were all “pop icons” so I was Lady GG of course, Molls was T. Swift, Lindsay was B. Spears, Liz was Miley and Elise was Katy Perry. After a few hours at The Cellar we decided to take a chance on the heinous Aardvark (we all hated this place in college) but it turned out to be awesome because everyone we loved was there and the cover band was awesome!
All in all we had a great time and I love you Texas!!!! 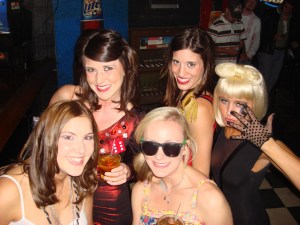 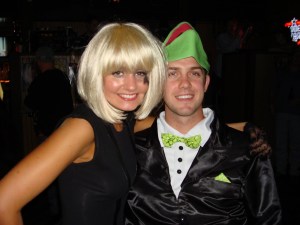 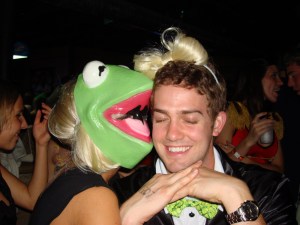