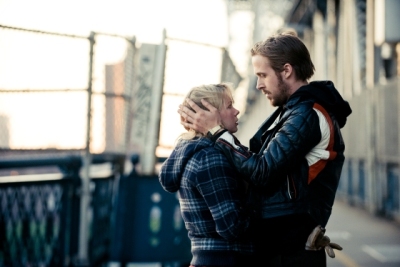 “Girls settle.  They grow up, their whole life, trying to find Prince Charming, and then settle for someone because he has a good job.”

Last night I had the opportunity and pleasure to see a screening of Blue Valentine, put on by Ben Lyons.  I was pretty ecstatic because the movie is getting huge Oscar buzz and doesn’t come out until next month.

Now, if you know anything about Sundance, you know that a lot of the movies there are independents that don’t include many romantic comedies, so I knew right away this movie was going to be raw and probably uncomfortable at times.  Plus, everyone is reporting that the Weinstein Company is currently trying to fight the NC-17 rating — I’d have to agree.  I think it’s Rated R at the max.
It stars the charming Ryan Gosling and the wonderful Michelle Williams.  Both were brilliant.  The movie runs around 120 minutes and the whole time you’re emotionally engaged, whether you’re squirming in your seat or smiling from ear to ear.
For anyone who has seen this movie, and more importantly, if you’ve ever loved someone else, it’s not hard to relate to the characters in one way or another; the blissful feeling of falling in love for the first time really hit home for me. And surprisingly, I related a lot to the male lead in the movie, Dean (Ryan Gosling). During the Q&A, one of the producers mentioned that the director’s vision was that the movie was somewhat of a duet between Man and Woman, Past and Present.  It certainly felt that way.  I don’t want to give too much away, but I really felt for Dean throughout the whole movie.   His unrequited love and affection for Cindy, the circumstances surrounding their relationship and his reactions to such circumstances, the way she makes him feel, good or bad.  There are some scenes that take a while to sink in; you don’t really understand their depth until you’re at home and laying in bed.

Yet there were also several scenes where I empathized and somewhat related to Cindy (Michelle) — as a woman in general, but also during her disappointments, her need and want for more.  Ironically, Cindy is epically “better” than Dean, or at least according to social standards; she graduated from high school, she wants to be a doctor, she still has a mother and a father.  Dean does not have any of those things, and it’s apparent that he loves Cindy, however continues to feel inferior.  But what he gives to her emotionally is more substantial than what she is seeking — or so she thinks.  I say that she is “ironically better” given the severe physical and emotional trauma we see her go through in the movie.

I think this film is a realistic depiction of what can and does happen in relationships, especially those that come out of tragedy, loss, or young love.  Not that every relationship begins or ends the same way, but the emotions of meeting someone new and going through hard times with that person were all realistic and at times unsettling.  A lot of the movie I was covering my eyes and peeking through my fingers because it was hard to swallow what was going on on-screen.  People are raving about this movie because it’s striking a chord, whether than can fully relate to the relationship on screen or just to a fragment of it.
There are sex scenes.  But it’s not… offensive.  It’s definitely a movie you don’t go to with your Dad, that’s for sure.
I applaud both Ryan and Michelle for their dramatic representation of Dean and Cindy as teens and as adults.  Ryan looked like a completely different person as a father; Michelle gained 15 pounds for the role.  The movie demanded a lot emotionally, and I have to say that it was hard not to cry or feel butterflies when appropriate.  Except I must note that I had to refrain from crying because 50 Cent was sitting behind me and I felt like an idiot; if he can get shot nine times and live through it all, I can put my big girl pants on and pull it together.  Plus it’s totally not gangster of me to be crying in front of 50 Cent, and that would ruin my street cred and furthermore my dream of someday portraying a rapping Carrie Underwood on Glee if word ever got around to Ryan Murphy.
There was a Q&A with two of the producers from the movie afterwards and they had some interesting facts to share.  The budget was $4 million and director Derek Cianfrance wrote the script 12 years ago — he wrote 66 drafts of it.  In the original script, there is a hiatus between filming past and present.   When Ryan Gosling signed on, he wanted a six year hiatus.  Obviously the financiers weren’t too thrilled with this idea, so they agreed to one month.  During this month, Ryan, Michelle and their daughter in the movie basically were a family — their characters, Dean and Cindy, had no reason “not to exist.”  They went grocery shopping together, fishing, on dates, got in arguments, etc.  They were those characters, which explains why a lot that goes on on-screen gives you a big punch in the stomach when it happens — it feels real.
It’s a movie you have to be prepared for, but bravo to everyone involved in production.  And a heavy congrats to the cast and crew.