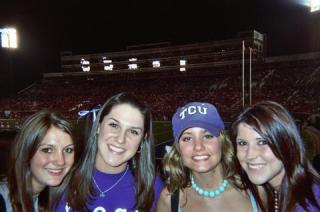 These comments all come from people not in the MW conference, mostly people who are used to winning and never thought their empire would surely dicipate.

I’m competitive but level-headed.  I’m not afraid nor embarrassed to admit defeat.  I know how to take things with a grain of salt and when to surrender and accept the truth.  And the only things I get wrilled up about are the Yankees and TCU.

It’s been God’s grace that has me biting my tongue and just nodding silently when people criticize the frogs.  Since I’ve been at TCU, our team has progressively gotten better and better.  Not once did I see us being a Top 10 team, ever, and the fact that we have been the past two years is really great for not only our alumni and students, but the future of the school.  Let’s face it: if you live in the south, you want a good football team at your university!

So Saturday was the big day.  We played Utah, a Mountain West team, but also a ranked team.  Forget that we beat Baylor, Air Force, SMU (I shutter just thinking of what a fiasco that game started out like)  This team was the doozy we had to beat.  Nothing matters — forget that we are undefeated, it must be “luck” because our schedule is so easy!  I understand that Mountain West programs haven’t been as strong as the the SEC or Big XII in the past, but we’re getting there.  And I think TCU is making the first jump in the right direction.

As for Saturday, we had to blow this one out of the water to have people give us the time of day.  AND WE DID!  I was a little scared, I have to admit.  I wanted not to only win, but to play like the team I know we are.  We did.  We looked great out there, and while some haters people are murmuring that it’s because Utah isn’t as good as everyone thought, it’s more like a wake up call: we are that good.

Look, I’m not exactly thrilled that we are in the Mountain West conference.  But the teams we are playing are legitimate.  And we haven’t lost to one of them.  For heaven’s sake, I still get comments about the bowl game last year and Boise State.  Um, that’s great, except that was last year — we played them this year and beat them.  It’s like saying that UT is better than OU because they won the Red River Rivalry in ’09, even those OU beat them this year. (Because, coming from a family of Longhorns, everyone knows you base how good you are on that game alone.)

And, I hate to be the one who mentions the unspeakable, but I’m not sure why other teams (or their fans, rather) look down upon us this year; why they feel free to criticize TCU when their teams are falling apart at the seams.  And while I’m not gloating, I’m just saying that one point Baylor was #1 in the Big XII South, and that both teams that were in the National Championship last year aren’t even in the Top 10.
But it seems we can’t ever catch a break.  I don’t know what we’re going to have to do to get some respect. Kirk Herbstreit STILL favors Boise State, regardless of the games we’ve been turning out.  It’s unbelievable!

This is how I like to think about it: Man A (TCU) works at a smaller firm that doesn’t have a lot of notoriety.  It’s an up-incoming firm.  He’s working hard, he’s getting a lot done, he’s progressively moving up the totem pole.  His work is equivalent to a larger corporate firm’s standards.  Then there’s Man B (SEC, Big XII, etc.).  He works at the large, prestigious firm.  He’s been in the same job for years.  While he’s successful, he’s not doing as well as he had been in the past.  But the firm is raking in the cash, signing a ton of new shiny clients and has a strong, long list of supporters.

Man A and Man B end up going up for the same job.  Man A is qualified, educated and brings a lot to the table: he is just as good, if not better, than Man B.  Man B is qualified as well, has a great record of success, but he’s been struggling this year.  But because Man B has that large, prestigious firm on his resume, people tend to give him the benefit of the doubt or a second glance.

What am I trying to say here?  It’s clear that the programs that have been wildy successful in the past, specifically the Big XII, have been struggling this year.  Instead of tearing down TCU, admit that we’re deserving, because if not us, who is (besides Oregon and Auburn)?

Don’t get me wrong:  I’m used to losing, I’ve had my fair share of heartbreak with the Frogs in the past.  But the hilarious thing about sports is that after January 10th, 2011, it doesn’t matter anymore!  The BCS sucks. There might be rankings, but next fall everyone starts back at square one.

In the mean time, GO FROGS!