Tonight, about 20 minutes from my apartment the AMAs are going on. (sigh.)
I would be a big fat liar if I said I don’t care that I’m not there, however I am the queen of silver linings so my take on it is that God doesn’t want me to be there this year… he’d rather me wait for my first award show experience when I’m actually working the event, preferably on the red carpet 🙂
My friend Liz had a gal pal selling two tix for $150 each, but I’m not willing to shill that out so close to the holidays (it would have been on my conscience for-ev-er).
Instead, my friend Dennis that I have mentioned before has been sending me photos! He has a cool enough job, scratch that, he is just cool enough in general to get to run around LA Live and do whatever he wants. So here’s some photos from the red carpet and even some aerial views. 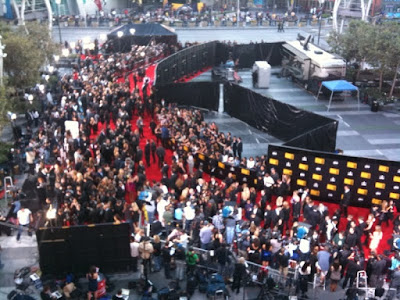