Val got an e-mail from The Daily Candy going something like this: 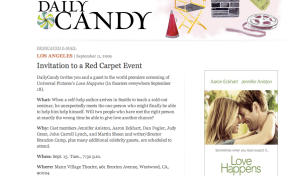 Invited? To a RED CARPET event?! You know I’m there!
Let me explain. Val and I have had this “bond” if you will over the movie Love Happens. It was after she had gotten back from a month in New York City and we went to go see 500 Days of Summer (which we loved!). In anticipation of the movie, we got the pleasure of watching the preview/trailer for Love Happens. First off, the trailer is terrible. I was psyched to see Aaron Eckhart and Jennifer Aniston together, however this movie looked like it was going nowhere – and fast? The Fray song? Seriously?! This is going to be a miserable, miserable film. And that TITLE! I mean were they even trying? Love Happens? Once we realized it was supposed to be an ironic/not so coincidental twist on “shit happens,” Val and I looked at each other with pure disgust and mostly horror.
We knew we had to see it.
However, would we pay for it? H-no! I mean movies here are equivalent to taking out a quarter of my savings. Tickets are expensive and the refreshments are astronomical; pair that with the parking here in LA and you’re looking at around $25 just for one person. Ouch.
Then we got this glorious e-mail. Val did, rather. We knew we had to go. A free movie? During a premiere even?! OK!
Tonight was the premiere and we got there around 6:00. Our tickets were at will call so I dropped Val off to get in line while I parked the car. The premiere was in Westwood close to the UCLA campus and let me tell ya – I was so thrilled to be around a college campus again! It looked like a town instead of a crazy city and there was a cute little block of restaurants and bookstores and things of that nature. I hadn’t seen so many kids my age since last spring! It made me very reminiscent.
We got a free parking pass which was awesome, so I parked and high-tailed it to the theater. Once there, I found Val in a long line waiting for our tickets. Here’s the deal: we were on the RSVP list but nobody was guaranteed to get in. Drats! We were never going to make it! Until we did.
We received a legitimate assigned ticket which was awesome and we walked a red carpet to get into the theater! Once inside, there were piles of popcorn bags and sodas and waters stacked up ready for everyone. What?! FREE CONCESSIONS?! Are you kidding me? Who knew a freakin’ movie premiere would be the cheapest movie I’d ever seen?
After getting our snacks we made our way to the balcony and our seats. We had a great view and the theater was gorgeous. We waited what seemed to be forever until the movie finally started without any previews.
Now, I was very skeptical of the movie. However, Aaron Eckhart was awesome and I really did enjoy the message of the movie. It was not really a love story at all. Frankly? Jennifer Aniston could have be completely removed from the script and it still would have been a nice movie. And the title is completely deceiving. Val suggested Accidents Happen and I totally agree that that title would have been more accurate than the real one.
Even though we didn’t see Jen or Aaron, the thrill of being there was enough for me. We asked another patron whom we overheard saying used to work movie premieres about the celebrities and where they sit and she told us that sometimes they just walk the red carpet and leave or they’ll sit in a big group with the crew. Among the commoners such as us?! Wow!
We decided to finish off our “date” at Mr. Noodle (yum!) and with a nonfat, five pump chai latte from Starbs. A great finish to a great night! I can finally say I attended a movie premiere. Mark that off my list!