Long time no chat.  How are you?  This past week was “spring break,” but given none of my friends wanted to head over to Cali or Vegas, opted to stay and work.  Gotta make some scrillaaaa!

This week has been chaotic.  It started of horribly, but it helped me to learn that I can find comfort in a few good friends.  You know when you meet someone and you’re like, “that is exactly how I feel!”?  My friend Blaine did just that for me.  She sat, listened, and then chimed in later after I had spoken my mind.  The best part is that she wasn’t shoving sunshine up my butt either – she was just telling me like it is.  Thank you Blaine.
I was determined not to spend every night home alone, so I shacked at Blaine’s for a few nights and slept in Haley’s bed with Rocko (the dog).  Thanks Hale! 🙂  It was fun having close friends around to dance with and chat about random things with, like how one of my friends owns an airbrush tanning machine and used to spray herself.  Or about my adventures at the spa/tanning salon.
For all who don’t know, I just started a new job in January at a spa.  Within two weeks of working, they asked me to manage the tanning salon to bring in more clients and get that really up and running.  It’s gone great so far!  I got certified to be an “airbrush tan artist” and nothing phases me at this point.  I’ve seen everything.  And I mean EVERYTHING.  I’m also convinced that half of the population has nipple rings, or at least half of the tanning population, because about 5 out of every 10 airbrush clients have them!  Anyway, if I can a) sell products and tanning memberships, b) airbrush people with them not feeling awkward (and me not feeling awkward) and c) get tips for doing so that I can rule the world.  Getting through awkward situations is a complete success in my book.  And dangit, I’ve nailed the art of airbrush tanning. 🙂
Anyway, today was an exciting day!  But let’s backtrack to yesterday.  I worked from 10-6, but not without some chaos involved.  Upon arriving at work, things were pretty slow so I was just working on some management stuff for the salon.  Around 1:15, I got a break to go get lunch so I got in my car – which, by the way, has bird crap ALL OVER IT because apparently the birds felt that crapping all over my car was a spectacular idea – and I starting driving to Central Market.  Of course I get on my phone to check my e-mail and I see this: 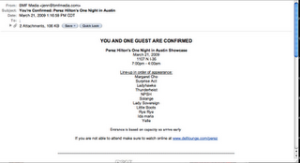 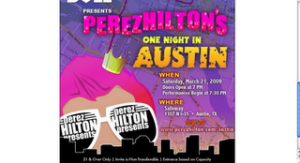 Perez Hilton threw this huge concert on Saturday night.  It had a 10 woman line-up with some great acts, but the issue was that a) it was in Austin and b) you had to be invited to get in.  Therefore, readers of PerezHilton.com could sign up for a credential to get on the guest list.  If you know me, you know I’ll do just about everything to get involved in the entertainment business, so I knew this concert would be an AWESOME networking experience as well as just a bad-a time.  So I apply for a credential because I am a also a junior writer for http://www.music-reviewer.com.  Nevermind the fact I hadn’t written for them in, oh, eight months, but I figured that I needed a legit title to receive admittance and I could easily get a huge review out of the concert.  So it was a win-win situation.  Therefore, the application was sent in and I washed my hands of it.
Now, the whole week I’m waiting to hear if I get in and I don’t get anything so I don’t think twice about it, until I receive this e-mail on Saturday.  Note the time: 1:17 p.m.  I GOT A CREDENTIAL!!!  Immedes I call my Mom and she tells me that I have to get off work to come home.  I turn around, talk to my boss, and he says I can go but he needs to go home for a few so I could leave at 3:00.
Okay, fine.  If I leave at 3:00, I can drive home and get to Austin around 6:30, just in time to get in line to make it to the concert.  Great.  Except for the fact I wasn’t wearing any make-up, my hair looked terrible, I was wearing work clothes – not exactly the look I was going for when wanting to make a first impression.  Getting there at 6:30 basically means there was no time to prep.  Not to mention all of my stuff was still at the BF’s apartment in Dallas, roughly an hour the other direction from Austin.
I still get off at 3:00 and rush home to grab clothes because I wasn’t about to show up in a pants suit to the concert.  Then, right before I turn onto I-35, I call my Mom.
“Mom.”
“Yes babis?”
“Should I even come?”
“YES!  This is a great opportunity.  Come.”
“Okay, I know.  But the invite says I have a credential to get in, and it says entry is based on capacity.  What if I can’t get in at all?  It says to get there early and I’m barely making it.”
I ultimately decided it wasn’t a good idea to go.  I turned around and drove back to work and that was the end of it.
Until I realized it was the worst decision EVER, because not only was it the biggest SXSW concert of the entire week, there was a huge surprise performer at the concert which just so happened to be KANYE WEST.
Anyway,  I can’t stop kicking myself about this.  But just knowing I was able to get a credential at all makes me feel … nice.  Still stupid, but nice.
Now on to today, Sunday.  I’m in Addison with Stu because tonight was my shoot with Dixie!!! It was so fun.  And I was really nervous.  People are always like “Do you get nervous?” And I’d say I’m nervous a lot more than I put off.  I guess if I can exude confidence that’s great, right? But Dixie was awesome and made me feel relaxed and really pretty.  Need a confidence boost? Go get professional photos taken with Dixie. 😉  www.dixiedixon.com
We did a few different looks which were all my style so I hope the results turn out great!  I’m sure they will because she is an awesome photog!
Off to work tomorrow… and then back to reality.  Countdown to B.Spears: EIGHT DAYS!
Love ya!